Benthic macroinvertebrates, which consist mostly of aquatic insects, are an important component of the food web and different groups have long been used as indicators of water quality. Dragonflies and damselflies, in particular, are considered to be indicators of good water quality, and their absence is a warning flag of potential problems.  They are very sensitive to many contaminants and do not tolerate low oxygen or poor water clarity very well. They are lie-and-wait visual predators so reduced water transparency from too much muddiness is a problem – just like for trout and walleyes. The graph below shows that Odonate (dragon and damselflies) relative abundance was negatively correlated with turbidity – that is the muddier the water the fewer Odonates were found in the wetland vegetation.

Abundance of Dragonflies and Damselflies (Odonata) are good indicators of water quality. Click to zoom.

Abundance of Dragonflies and Damselflies (Odonata) are good indicators of water quality. 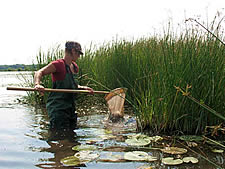 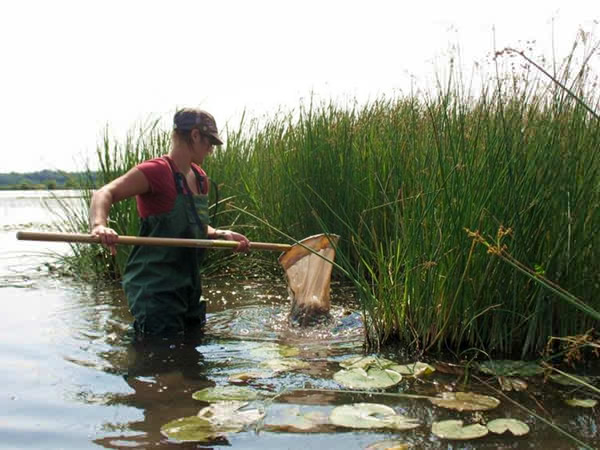 The diversity of the Trichopteran group of insects declines with increasing sulfate. Click to zoom.

The diversity of the Trichopteran group of insects declines with increasing sulfate.

Another interesting association is shown here, where the diversity of the Trichopteran group of insects, known as caddisflies, declined with increasing sulfate over the range of only 5 to 25 ppm – concentrations far below levels known to be detrimental to freshwater aquatic bug communities. These caddisflies (moth-like as adults) are an incredibly diverse group of bugs, which are best known for their intricately constructed “homes” that they live in and carry around with them in their aquatic phase. These “homes” are built from whatever bits of sand grains, pebbles, pine needles or other debris they are able to obtain from their habitat (read more at Duluth Streams).

On the Minnesota Iron Range, mining for the extraction of iron as well as possible future mining for copper, nickel, chromium, possibly titanium, and rare earth metals, occurs mostly within the Upper St. Louis River watershed. Mining activities can contribute to the generation of the common “salt,” sulfate (SO4-2), which forms when trace amounts of sulfide minerals, such as pyrite, that are present in the ore are exposed to air and water in waste rock piles and in ore processing. There has been a large buildup of sulfate in tailings ponds and abandoned mine pit lakes from a century of iron mining, but until about the mid 1980s this wasn’t consider to be a major environmental impact. Sulfate can be as high as 250 ppm (parts-per-million) before exceeding the federal and state drinking water standards, and even then it is regulated as a secondary standard that relates to taste and laxative potential, not toxicity or other human health effects. Minnesota’s standard, however, is much lower – 10 ppm sulfate for the protection of native wild rice. This standard has been greatly exceeded in many ponds, lake embayments, and other wetlands linked to mining that have, or once had, wild rice stands. Since the existing standard was based on state-wide survey data from the 1940s (i.e., correlating where wild rice was found in relation to the sulfate level in the water) and not to direct toxicological experiments, the standard has been contested by the mining industry. New studies are just beginning to review the issue in detail (read more the Minnesota Pllution Control Agency. 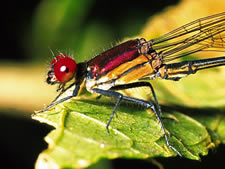 The Trichopteran group of insects, known as caddisflies, is a good indicator of water quality. Click to zoom. 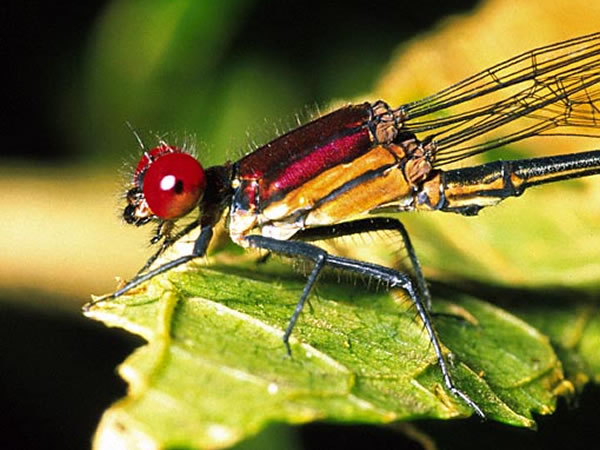 The Trichopteran group of insects, known as caddisflies, is a good indicator of water quality.

A decline in the abundance of sensitive mayflies (Order Ephemeroptera) is noted with increasing overall stress. Click to zoom.

A decline in the abundance of sensitive mayflies (Order Ephemeroptera) is noted with increasing overall stress.

We also found relationships between other groups of aquatic invertebrates and a variety of water quality characteristics, including color, specific electrical conductivity (a measure of salinity), chloride, turbidity, total nitrogen, pH (acidity), temperature, and sulfate. Associations between groups of aquatic invertebrates and the overall SUMREL stressor scores for the wetland habitat from which they were collected showed a decline in the abundance of sensitive mayflies (Order Ephemeroptera) with increasing overall stress. Additional analyses are in progress using other important attributes of the invertebrate community such as species diversity (how many different groups are present) and evenness (how evenly is the overall number of critters spread among the different groups). No one indicator is necessarily the best one, since they all form part of a larger picture that helps tell the story of how they are getting along as a whole in the estuary.