Clough Island, a 346-acre island located in Spirit Lake just west of Dwight's Point and the Superior Municipal Forest, is the largest island in the St. Louis River. The island is owned by the Wisconsin Department of Natural Resources and is part of the St. Louis River Stream Bank Protection Area. 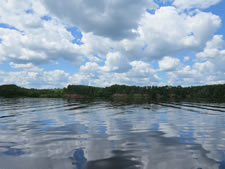 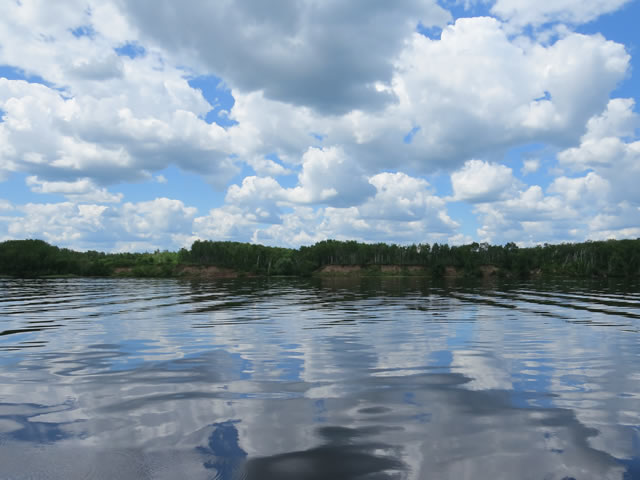 The first owner of Clough Island was Solon S. Clough, who was the island's namesake. All but 10 acres of the island were purchased in 1904 by Robert B. Whiteside, a timber, mining, and oil baron, who built a large summer residence on the island. The island was likely logged to clear space for an expansive island residence that included a large eight-room house, an ice house, a creamery and blacksmith shop, a bunkhouse, a huge barn, a turkey coop, a chicken coop, a sheep shed, a pig pen, a machinery shed, and a pump house. In its heyday, the family kept 40 head of brown Swiss milking cows, about 500 sheep, wheat fields, an enormous vegetable garden, and trained race horses on a race track right on the island.

During the summers of the early 1900s, the affluent Whiteside Family enjoyed their summer island retreat. Eventually, after an incident when one of the Whiteside children was nearly swept away by the swift current of the channel, the Whitesides started spending their summers at a different summer retreat they built on the other side of Duluth, far from the hazards of the St. Louis River. Family and caretakers watched over the property during the Depression Era, without electricity or plumbing. The residence had electricity installed when it was built in the early 1900s, but the copper cable connecting the island to the mainland was stolen during the Great Depression. In the 1940s, the island was reconnected to the grid, but the Whiteside Family never returned to the island on a regular basis. Eventually, the massive L-shaped barn burned down, and then on a windy day in May 1956, the chimney overheated and the main house burned down.

The remaining ten acres on the southeast part of the island were owned by Edward Porter Alexander. E.P. Alexander was the owner of a real estate business and the son of a prominent and well-known southern gentleman. In 1914, Alexander decided to build a lodge on his property on Clough Island. At that same time, the Gay-Sturgis brokerage firm went bankrupt and Alexander lost his entire inheritance from his father. Because of his great loss, Alexander named his new lodge on Clough Island "Killjoy Lodge." The family spent many summers on the island, buying fresh cream from their neighbors, gardening, and paddling on the water. After the children in the family grew up, it is unclear what exactly happened to Killjoy Lodge. Alexander passed away in 1939, after which the ownership of the island was solely in the hands of the Whiteside family. However, the family's historical legacy continued as Alexander's grandson, Alexander Butterfield, revealed the existence of tapes during the Watergate scandal that eventually led to the downfall of Richard Nixon.

Today, Clough Island is protected from future development. In 2010, the Nature Conservancy purchased the islands from developers. In 2011, the property was transferred to the WDNR for management as part of the St. Louis River Stream Bank Protection Area. Funding for preservation of the island came from a grant from the USFWS National Coastal Wetlands Conservation Grant Program, Wisconsin’s Knowles-Nelson Stewardship Fund, and from matching funds pledged by the McCabe Chapter of the Izaak Walton League of America, Duluth Chapter of the Audubon Society, Western Skyline Preservation Alliance, Save Lake Superior Association, Twin Ports Bass Masters, Lake Superior Chapter of Muskie’s Inc., and Friends of Superior Municipal Forest.

Bordered by steep clay bluffs, Clough Island is broad level red clay plain consisting of a patchwork of extensive emergent marshes, open sedge meadows, forested wetlands, and boreal forest uplands supporting aspen, pine, white spruce, birch, and fir. Edges of the island to the north, west, and east are fringed by emergent wetlands. Much of the south-central part of the island, where agricultural activities were focused, is a complex of wet grasslands, sedge meadows, and shrublands that has generally recovered well from past farming and grazing. The northern portion of the island is forested. The forests were harvested on the island at least twice, once in the early 1900s and probably again around the 1950s. For more information about the natural resources on and around Clough Island, view the WDNR report titled Clough Island: A Summary of Inventory and Monitoring.

While much of the island is degraded due to decades of logging, farming, grazing, and human habitation, several pockets of high quality habitat remain in the northern portion of the island. A 15-acre moderate-quality boreal forest is located in the north/northwest portion of the island. A forested seep originates in the northwest and supports black ash and a diverse ground layer of ferns, sedges and forbs. The remainder of the forest is lower quality and dominated by aspen-birch. The understory is dominated by invasive common buckthorn (Rhamnus cathartica); and honeysuckle (Lonicera tartarica, L. morrowii, and L. x bella) are common along forest edges (Hlina, 2013; Staffen and O’Connor, 2014).

The WDNR received a Coastal Wetland Protection & Restoration Grant from the U.S. Fish and Wildlife Service in 2012 to conduct habitat restoration on Clough Island. The goals of this project were to better understand the natural communities on the island, restore the degraded forests by removing invasive species, planting conifer trees, remove and restore the remaining sheds and unauthorized campsite on the island, and install an educational sign at the main island access point. Since 2013, approximately 8,700 pine seedlings have been planted on Clough Island.

Invasive buckthorn and honeysuckles, and other upland species are being managed in an ongoing effort by the DNR. As part of estuary wild rice projects, 10 acres of wild rice is being seeded yearly in the wetlands around Clough Island in partnership with the St. Louis River Alliance.

Non-native phragmites around Clough Island has been treated and monitored since 2014. Non-native phragmites is a tall, aggressive, invasive wetland plant currently found in limited areas in the estuary. The Great Lakes Indian Fish and Wildlife Commission conducted an estuary-wide survey of phragmites in 2014, and a map tool on GLIFWC’s website shows the results. Because of the limited extent and early detection of the species, there is still a window of opportunity to eliminate the species from the estuary. In other areas such as Green Bay in Lake Michigan, non-native phragmites is so extensive that elimination is no longer possible. The WDNR and GLIFWC and other partners have treated many of the stands around the estuary. Monitoring and treatment will continue through the aquatic invasive species programs.

Clough Island is open for nature-based day-use outdoor activities such as hiking, picnicking, and wildlife viewing. The island is accessible by boat in the warm season. The two closest boat landings are the Clyde Ave Boat Launch located west of the island in the Smithville neighborhood of Duluth, Minn.; and the Arrowhead Launch northeast of the island in Superior, Wis. Overnight camping and motorized vehicle use are prohibited. For more information about Clough Island and the rest of the St. Louis River Stream Bank Protection Area, visit the WDNR webpage.