Formed in 1934 when the St. Louis River navigation channel was dredged, Interstate Island rests on the Minnesota-Wisconsin border and is co-owned and managed by the states of Minnesota and Wisconsin. The island is federally listed as critical habitat for piping plover. It is also one of only two nest sites in the Lake Superior watershed for common terns, a species listed as endangered in Wisconsin and threatened in Minnesota.

The project restored the height of the island with high-quality sand and anchoring stone to restore the sandy, wind-swept habitat needed by these uncommon birds. Fencing and string grids already located on a small part of the island were repositioned so they can continue to provide protection from gulls and other avian predators. 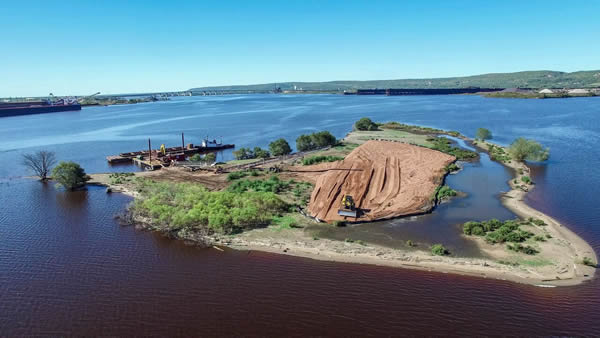 This project was completed in December of 2015 and provides important nesting habitat for plovers and terns. Minnesota Department of Natural Resources wildlife managers continue to monitor the island for tern reproduction rates and signs of attempted nesting by plovers. The project was funded by the U.S. Fish and Wildlife Service and Minnesota’s Outdoor Heritage Fund.