The St. Louis River Watershed, from its headwaters to the St. Louis River Dam. Watersheds are shaded by an index of relative human stress as described below. Streams and rivers feeding directly to the estuary are shown in Click to zoom.

Watersheds of the St. Louis River Estuary. Watersheds are shaded by an index of relative human stress as described below. Click to zoom. 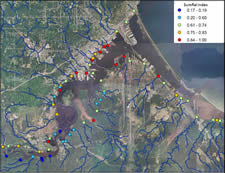 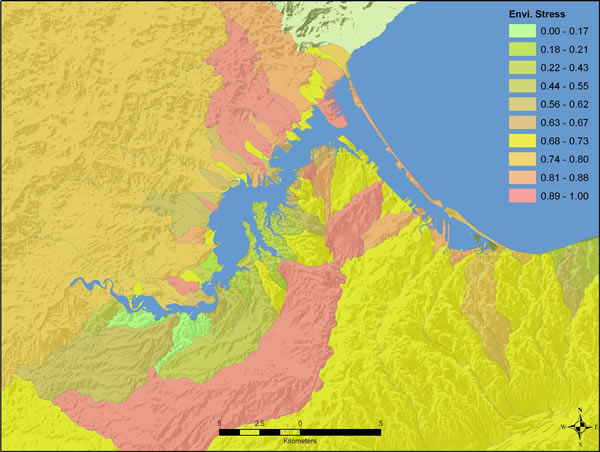 Watersheds of the St. Louis River Estuary. Watersheds are shaded by an index of relative human stress as described below. 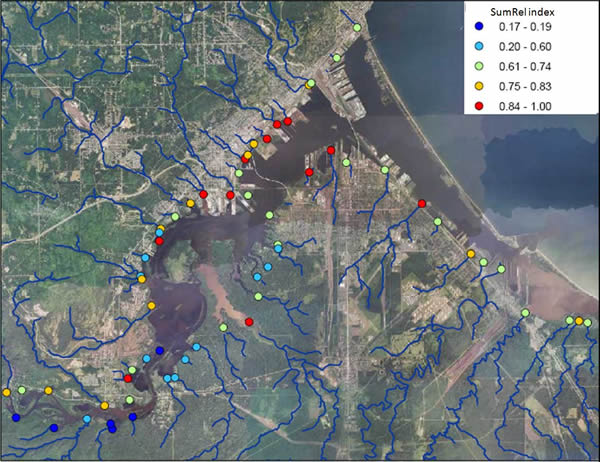 The St. Louis River Estuary has a long history of human impact, from its early logging and settlement days to the development of heavy industry in the mid to late 1900s to the present-day active port cities of Duluth and Superior. Many of the human impacts to the estuary come from its watersheds, delivered by the St. Louis River itself, which originates far to the north in Minnesota’s Iron Range, or by the many small streams, creeks, rivers and ditches that flow directly into the estuary.

The environmental impact to watersheds can be summarized by analyzing individual factors that indicate the intensity of human activities. In a previous study, we analyzed environmental stressors across the entire Great Lakes basin (Danz et al 2006, Host et al 2005, 2011). Human stressors that were closely tied to environmental impacts included population, the density of roads and other paved surfaces, the amounts of urban and agricultural land, and the numbers of point sources of pollution. In the present study we used Geographic Information Systems (GIS), computer programs for analyzing maps, to summarize these impacts for the individual watersheds of the streams and rivers that enter the estuary. Each stressor was scaled from 0.0-1.0 (0 = best condition or lowest stress and 1 = worst condition or highest stress), and all stressors were summed to create a single index that reflects the relative amount of environmental stress within each watershed. The summed index, called SumRel in the figures that follow, overlaid on a map of the estuary, provides a visual representation of relative human stress, also scaled 0.0-1.0. The low values represent the relatively undeveloped forested watersheds of the upper estuary, while the high values correspond to the heavily industrialized areas of the Duluth-Superior Harbor.

How well does this map work? To test it, we sampled water quality, wetland vegetation, and stream macroinvertebrates at the mouths of streams flowing into the estuary. Streams were chosen to represent a range of watersheds, ranging from the least to most heavily stressed watersheds across the estuary.

There are approximately 60 rivers and streams that enter the St. Louis Estuary, with the vast majority of the flow coming from the St. Louis River. But each of the tributaries has the potential to deliver water, nutrients, pollutants, and sediments to the estuary, and each is important to the people that live there. To understand the gradients of human stress across the estuary, we divided the 60 watersheds into groups of 10 and randomly selected 2-3 streams for sampling. At these sites we sampled the wetland plant community at the mouth of the stream and the macroinvertebrates (insects, worms, and other invertebrate species) that live on those plants.

These streams, along with several additional streams, were also sampled for water quality. Water quality is sampled somewhat differently –while plants and macroinvertebrates were sampled once during a season, understanding water quality requires repeated visits to a site along with occasional event (rainstorm or snowmelt) sampling. This allows us to determine how water quality changes among watersheds over the course of the year. In addition, we also sampled the main channel of the St. Louis River from the dam to the harbor. This channel, for reasons understood by only a very few, is called a thalweg.

We sampled sites during the summers of 2010 and 2011. While these are a snapshot of the estuary in time, they provide baseline data for future work and become part of the much larger body of data collected by the Minnesota and Wisconsin Departments of Natural Resources, the US Environmental Protection Agency, university researchers, and many others. By selecting sites along the human stressor gradient, we can begin to have a sense of how individual streams and rivers contribute to the overall health of the estuary. Explore the pages on water quality, plant communities and macroinvertebrates to see what we’ve learned!