From canoes to whaleback freighters and sailing schooners to passenger liners and thousand-foot ore boats, the shallow waters of the St. Louis River Estuary (SLRE) have provided a natural harbor for more than 200 years.  The SLRE sits in close proximity to an abundance of natural resources, including timber and iron ore, and provides a route for the transport of raw materials.  In 1959, the construction of the St. Lawrence Seaway made the Duluth-Superior Harbor an international port by creating the world's largest inland waterway:

According to Andy McDonald, Duluth-Superior Metropolitan Interstate Commission Principal Planner, “the environmental groups in this town…, are very good at recognizing the importance of the port, because moving these bulk materials by water is the most environmentally friendly way to move it and they understand that.  But there is some environmental cost to moving these materials.”  The port was once a natural shallow harbor so dredging is necessary to maintain shipping depths, from 20 to 32 feet depending on location. Historically, dredge spoils have been used as fill to create docks, replenish eroded areas, and form new islands. The ore boats require deeper channels (27 feet). The movement of ore has a long history in the harbor, one remembered by Claire Schumacher, who enjoyed watching the sunrises when she worked night shifts at the ore docks. Today, finding a location to place the dredge material is an on-going issue, with habitat creation and mineland reclamation as two possible solutions.  Other issues related to shipping that affect the health of the estuary or the local economy include:

Shipping as an industry and a tourism attraction

Shipping here at the mouth of the SLRE is highly visible. In fact, a recent study commissioned by the American Great Lakes Ports Association found that it supports approximately 11,500 jobs, creates 545 million dollars in wages, and generates about 1.5 billion dollars in business revenue. Visitors to the Lake Superior Maritime Visitor Center down in Canal Park come to view the large ships as they come in. Dick Carlson, Facilities Manager for Cenex Harvest States (CHS) has worked for the grain elevators down in the harbor for 32 years. “People are awed by the size of the elevators,” he notes.  Although the community is much less connected than it once was both personally and professionally to the shipping industry, the port remains a well-known destination for seeing big ships.

Andy McDonald has 15 years of service for the Metropolitan Interstate Commission, which provides guidance and leadership on transportation and land use planning issues in the area. Read Andy's perspective.

Corrosion: researchers are grappling to understand the cause of accelerated corrosion of steel in the Duluth-Superior Harbor. Read more. 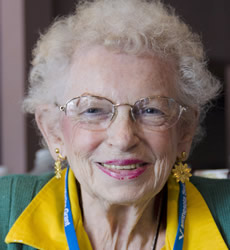 Leave the crummy on the high!

Claire W. Schumacher is a life-long resident of Proctor, and author of several books on local history, including The Whiteside Island Story, Ghostly Tales of Lake Superior and the fictionalwork Ore Dust in Her Shoes. She recalls her teen years, when she worked for the Duluth/Mesabi Iron Range Ore Docks towards the end of World War II. The men were returning and wanted jobs, including hers.

Claire recounted how the men didn’t want her to do well at her job, working the rails carrying iron ore down to the docks and the waiting ships. “They never told me that I was supposed to say ‘Leave the crummy on the high’- that meant, leave the caboose up on 40th Avenue West.”

For the most part she enjoyed her job, watching sunrises coming up over the hills when she worked night shifts, and even getting an opportunity to visit one of the big ships in the harbor. Since the St. Lawrence Seaway didn’t open until 1959, these 1000-foot Laker ships were from Cleveland, Chicago and Buffalo.

“One time, on my lunch time I was down below (we had to run up those steps, no elevator, 75 steps to get up to the office) and for some reason someone told us we could go up on a ship that was right there. I had a red suit on that day, I remember, because I got in trouble. They [people on board the ship] were really nice to us, showed us all around. But as I moved around the ship, they could see me from up above because of the red suit and they were hollering at me to get back to work I had never seen a ship before, it was fun.” 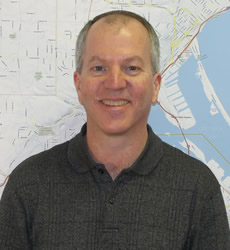 Family history in the Port abounds

Andy McDonald has been a principal planner for the Duluth-Superior Metropolitan Interstate Council (MIC) for the past 15 years, but his roots go back much further.  “I do have a little bit of a family history with the port around here. My grandfather worked the tugs [until 1958 just prior to the opening of the St. Lawrence Seaway]. My dad was a school teacher, so to supplement his income in the summer time he’d work at the grain elevators.”

The Commission Andy works for provides guidance and leadership on transportation and land use planning issues in the area, and the HTAC is one of three committees that advise them on Port-related issues, including dredging. In order for the harbor to accommodate the big ships, channels must be maintained to depths of 28 feet, depending on location, and areas must be found to place the dredge materials.

“Everybody, from the Izaak Walton League to the dredging company, sits around the same table four times a year.” – member of theHarbor Technical Advisory Committee (HTAC).

According to Andy, finding areas to place dredge materials is a big challenge.

Issue:  Dredge disposal facilities are filling up. Some dredge sediments contain copper, a contaminant that is above levels for residential use, yet it occurs naturally in the region’s sediments.

“The material is relatively clean, and what we have to do now is find uses for it, educate the people that it’s safe, it’s a resource,” explains Andy. 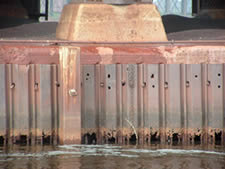 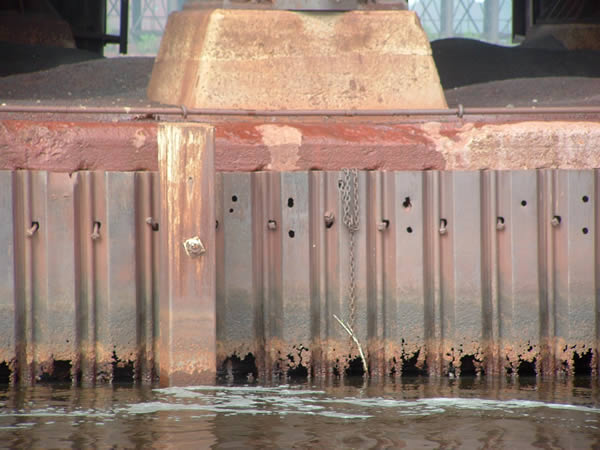 The sheet steel used for docks, bulkheads, and bridge structures has been corroding away at an unexpectedly high rate.

The Duluth-Superior Harbor has an expensive problem

The sheet steel used for docks, bulkheads, and bridge structures has been corroding away at an unexpectedly high rate. First identified in the 1990s, the Seaway Port Authority has estimated that the corrosion is consuming more than 50,000 lbs of steel per year and that fixing the damage could cost more than $100 million.

Several studies have been conducted since about 2004 to try to sleuth out the causes of this corrosion. Scientists funded by MN and WI Sea Grant, are cooperating with the Seaway Port Authority, the Army Corps of Engineers, and the University of Minnesota Duluth on a long term effort to identify the causes of the corrosion. Corrosion in freshwater has received little attention relative to corrosion in seawater but has typically been found to occur at rates as much as 10 times lower than in saltwater. Recent studies have shown that some St. Louis River Estuary sites have low rates typical of freshwater, while others are showing accelerated corrosion, in some places similar to that of saltwater ports. 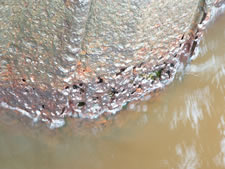 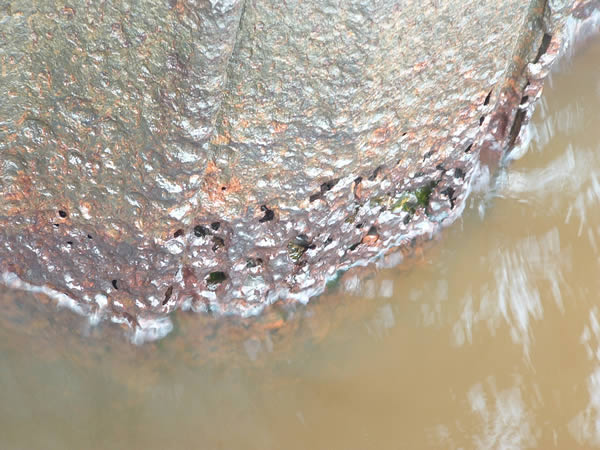 This detective work has led to the identification of a combination of physical, chemical, and biological factors that may be influencing corrosion rates. Termed MIB for microbially-influenced corrosion, it involves naturally occurring iron-oxidizing bacteria, which attach to carbon steel, forming nodules called ‘tubercles.’ Work by the Army Corps of Engineers has suggested that conditions beneath the tubercles cause copper dissolved in harbor water to adhere to the iron. When the inevitable winter ice arrives, chunks of ice scrape against the pilings causing the tubercles to break. This exposes the copper‐covered iron to oxygen, which in turn, causes the steel in the pitted areas to corrode faster – creating a Swiss cheese effect. Each year these tubercles are exposed to scraping by ice to varying degrees, depending on the severity of the winter.

Is accelerated corrosion in the SLRE harbor unique in the Great Lakes?

The SLRE is distinctive because the brown-stained waters of the St. Louis River Estuary (SLRE) are periodically intermixed with the green-blue waters of western Lake Superior as a result of seiche activity. Researchers have looked at historical water chemistry data to help explain the corrosion phenomenon, as well as a variety of other potential factors, but a detailed understanding remains elusive. Water quality has in fact greatly improved since the creation of the Western Lake Superior Sanitary District, and in particular, levels of chloride and sulfate have decreased, which would be expected to mean less corrosion. On the other hand, WLSSD’s improved wastewater treatment has helped dissolved oxygen levels rise back to normal levels from pre-WLSSD conditions - ; this could increase corrosion. Moreover, these water quality factors can vary greatly among sites in the lower estuary and likely have important effects on the many different types of microbes that colonize the tubercles. Given that these effects may be further affected by the increased temperatures and decreased ice cover observed in the past few decades, it is easy to see why one definitive answer has not been found. The SLRE corrosion issue has now prompted closer examinations of other Lake Superior ports as well as other Laurentian Great Lakes to see how unique the problem really is here.

The search is on for solutions

Whether or not the exact causes of the corrosion are understood, the search for short and long term solutions is underway. In the short term, catching corrosion early can help port managers avoid the need to replace expensive pilings. In the long term, research into preventative technologies, such as cathodic protection, in which a 'sacrificial metal' is attached to the steel piling, application of coatings, or use of ice protection barriers, may provide an answer to this economically important issue. 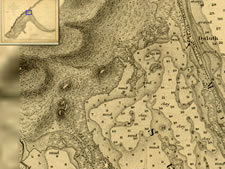 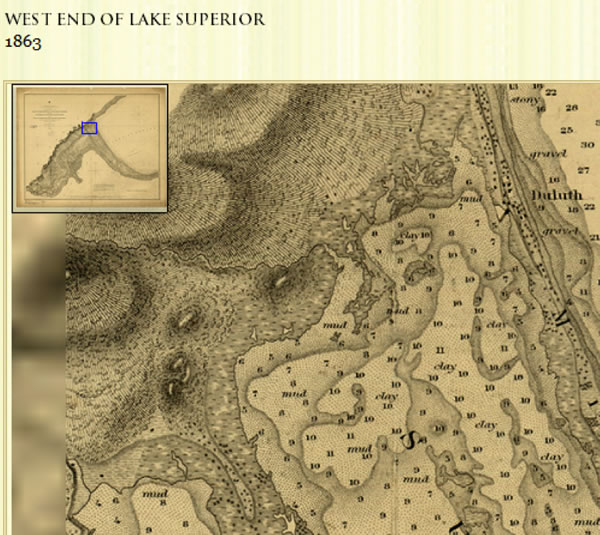 For over a century, the Port of Duluth-Superior has been one of the nation's largest and most active centers for maritime transportation. The port handles 42 million tons of cargo and nearly 1000 vessel visits on an annual basis (www.DuluthPort.com).

The development of the port over the past century has brought dramatic changes to the shoreline. According to William Hearding’s survey of 1861, the estuary coastline that now serves as docks and slips for 1000 ft lakers and salties was once a series of mud flats and shallows, with floating vegetation mats that would drift in and out of the harbor. This part of the lower estuary was biologically rich, providing an important spawning habitat for fish and supporting a rich bird and wildlife community.

The lower estuary has changed dramatically, now converted to hundreds of acres of dock facilities and industrial sites. As part of the water access required for shipping and industry, the mud flats have been replaced with ‘hardened shorelines’ – the steel sheet pilings, bulkheads and rip-rap that now make up most of the industrialized coast.

In our study of environmental stress within the estuary, we sampled water quality, wetland vegetation and stream macroinvertebrates at the mouths of streams entering the estuary. The sampling was designed to collect information across the entire range of low to high environmental stress. The ‘high stress’ areas were most often the industrial areas of the harbor, where road and population densities are highest. While we were always able to collect water samples, in many shipping and industrialized areas wetland vegetation was simply absent. This was largely due to historic and recent modifications to the original shoreline [ 3]. The abrupt transition from land to deep water along the hardened shorelines has reduced suitable aquatic plant habitat, preventing the establishment of the emergent and floating-leaf wetland communities that once characterized the lower estuary. 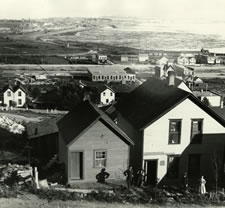 View of estuary mud flats in harbor from Duluth hillside. Click to zoom. 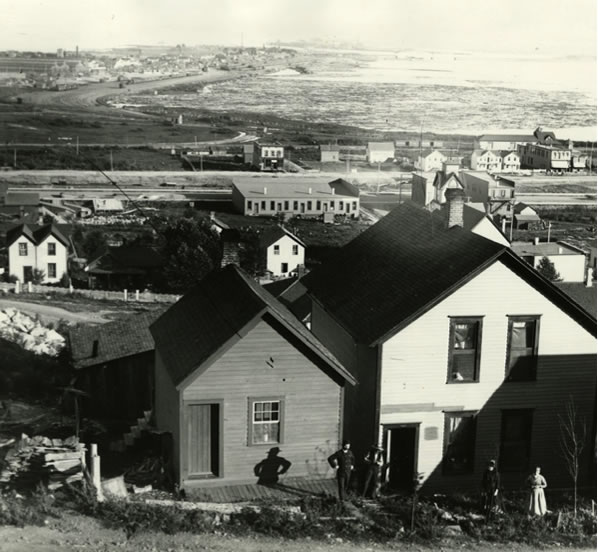 View of estuary mud flats in harbor from Duluth hillside. 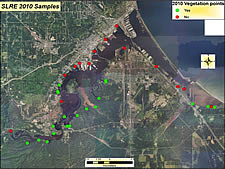 Sampling locations, showing stream mouths with and without wetland vegetation. Click to zoom. 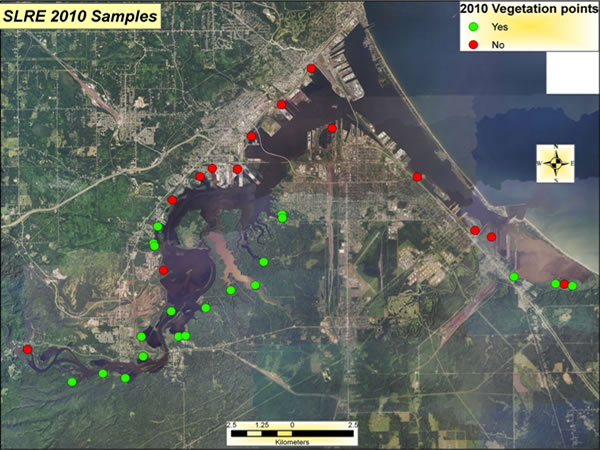 Sampling locations, showing stream mouths with and without wetland vegetation. 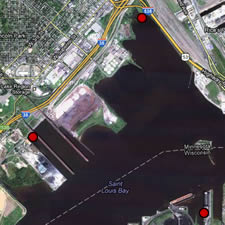 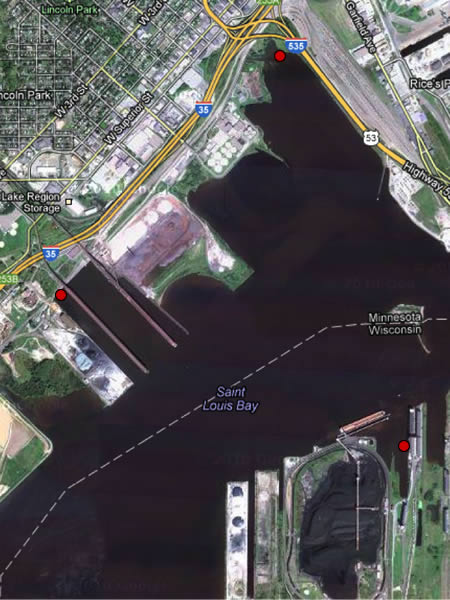