Wisconsin Point is a three-mile-long natural sand spit in Superior, Wis., that divides Allouez Bay from Lake Superior. Together, Wisconsin Point and Minnesota Point form one of the longest freshwater bay-mouth bars in the world. Forests of white and red pines fill the interior of Wisconsin Point, with sand dunes, wetlands, and beaches lining Lake Superior. 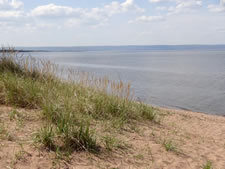 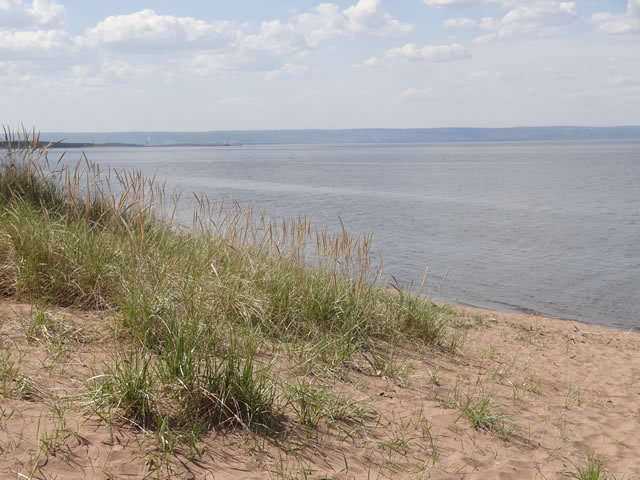 The sensitive dune ecosystem along the point is host to lichens, fungi, mosses, grasses, wildflowers, shrubs and trees. Although the dune species are adapted to the harsh dune environment, including drying winds, low soil moisture and fertility, intense sunlight, and blowing sand, they are especially sensitive to human disturbance. Wetlands occur intermittently along the dune system. These interdunal wetlands are home to many uncommon plant species and provide resting and feeding habitat for migrating and resident waterbirds.

The forest on the interior of the point has well-drained, dry soils and mature jack and red pines. This tuype of forest, called a xeric forest, is commonly found farther inland and is relatively rare along Lake Superior. Xeric forests are especially sensitive to human disturbance due to their dry soils, which can be easily eroded by wind and invaded by nuisance species. The xeric forest on Wisconsin Point is an important stopover habitat for a diverse range of migratory birds, including many rare species.

The Fond du Lac Band of Lake Superior Chippewa lived on Wisconsin Point as early as the 1740s, when the Ojibwe first reached the St. Louis River on their great migration westward. The point may also have been used by the Dakota prior to the Ojibwe migration. Dakota groups were present at the Head of the Lakes in 1679 when Sieur du Lhut (the namesake for Duluth) was exploring the region. 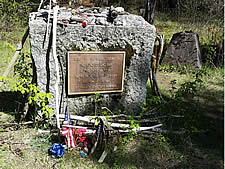 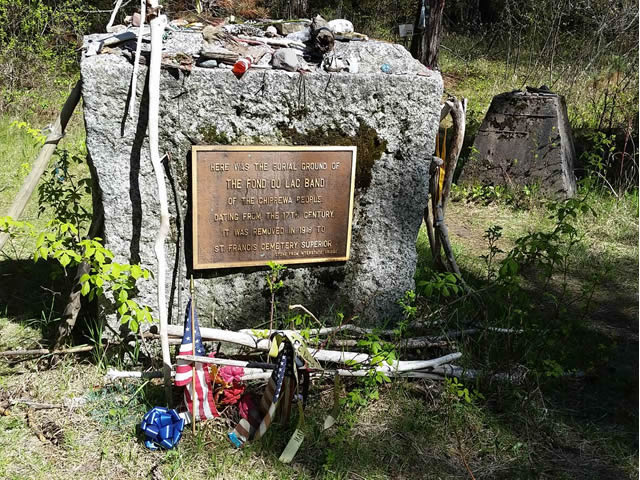 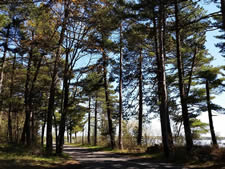 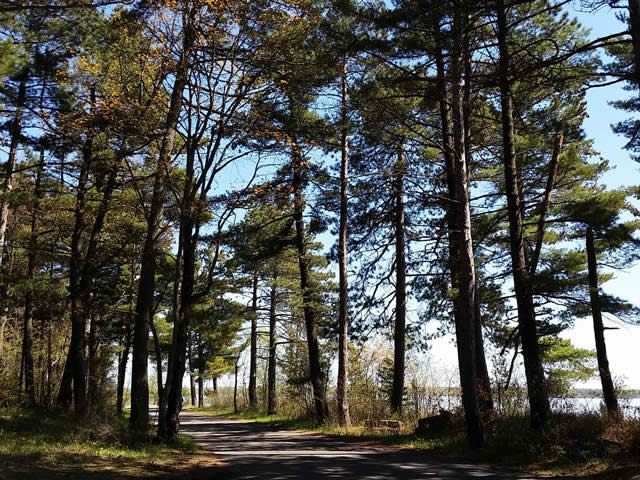 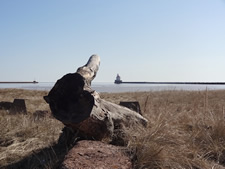 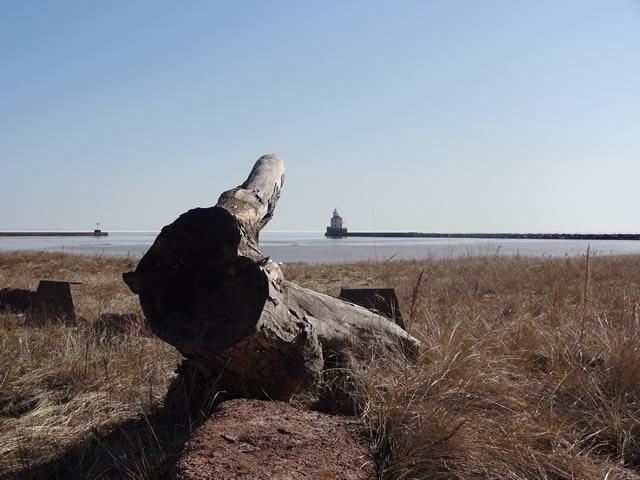 The first firm evidence of Native American occupation on the point is from an archaeological site on Wisconsin Point that dates to the 1840s or earlier. The site was a complex of villages, camps, cabins, and a large cemetery.  Early residents lived in bark lodges and teepees, and used the site as a fishing camp and for canoe-building. The cemetery contains graves that date from 1801 to the early 1900s. Up to 300 graves with spirit houses and fences were present.

The earliest known inhabitant was Chief Osaw-gee (Osaugi), who resided on the island with his family starting in the early 1800s. A trapper and canoe-builder, Chief Osaugi was known for negotiating a treaty with the U.S. government to obtain Wisconsin Point on behalf of the Fond du Lac Band of Lake Superior Chippewa in 1840-1842. In the late 1800s, the Osaugi and Lemieux families as well as other families built homes on the point. Today, relatives of the families who lived on the point know and remember the locations of their families’ homes, although the houses no longer stand.

The first documented European to visit Wisconsin Point was Jean Baptiste Perrault in 1784. The visit is said to be a result of his ship running aground. At that time, A North West Company fur trading winter quarters was located on Connor’s Point in present-day Superior. Later, in 1793, Perrault established Fort St. Louis, a trading post on Connor’s Point.

In 1855, the U.S. government formally recognized a claim to Section 28 on Wisconsin Point made by one of the founders of Superior, Joseph Addison Bullens. The claim was disputed by the Ojibwe living on the point, based on the argument that Bullens did not build a house on the claim, but the claim was held up in court. Bullens later sold the property to the Agate Land Company, owned by U.S. Steel Corporation. The company’s plans to construct a coal and ore docks and a railroad on Wisconsin Point can be seen on historical maps. The plans impacted the cemetery located on the island, which was slated for removal. Despite opposition from the Ojibwe living on the point, 198 of the graves were removed in October 1918, with the bodies reinterred at the St. Francis Cemetery on the Nemadji River. It is believed that a number of graves are still located on Wisconsin Point. At present, a stone marks the previous location of the burial grounds, where tribal members still go to remember loved ones. The site is maintained by Fond du Lac Band of Lake Superior Chippewa members.

Today, Wisconsin Point is owned primarily by the city of Superior. The lighthouse and property at the tip of the point are owned by the federal government, and a small property on the Allouez Bay-side of the point is owned by Wisconsin Department of Natural Resources. The city of Superior formally protected Wisconsin Point from development in December 1996. The property is managed as public open space, designed and intended for the use and enjoyment of residents.

For more information about the management of Wisconsin Point, visit the City of Superior’s website. 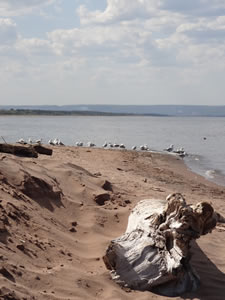 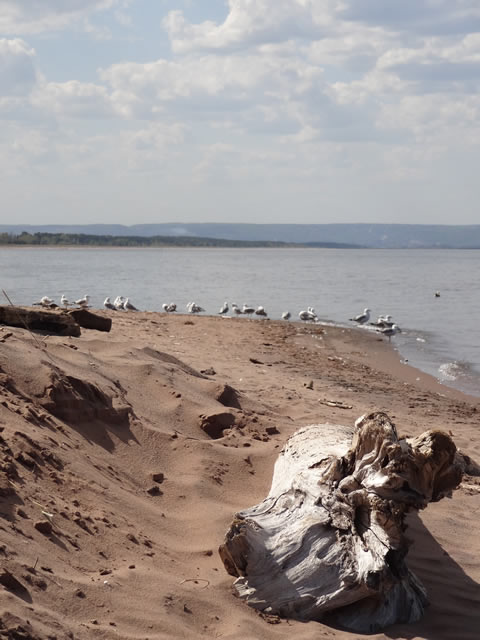 In the past years, human use has taken a toll on the sensitive dune and forest ecosystems on the on the point. The degradation of the dunes, introduction of invasive species, and presence of sensitive historical sites highlight the need for measures to reduce human impacts. The National Oceanic and Atmospheric Administration has partnered with the city of Superior, Wisconsin Department of Administration Coastal Management Program, and Wisconsin Department of Natural Resources to pursue a dune restoration project on Wisconsin Point. The project is listed as a priority in the St. Louis River Area of Concern Remedial Action Plan and is necessary for de-listing.

The project includes development of infrastructure to allow public access and protect the sensitive dunes as well as the historical sites on the point. Traffic will be focused at fewer access points, and many trails and parking sports will be restored and re-vegetated. Boardwalks will be installed for beach access across the sensitive dune ecosystem. Invasive species will be treated and removed. Lastly, the shoreline along Allouez Bay will be stabilized and the parking lots will be re-constructed using low-impact development techniques. The project will be under construction in 2018 and 2019.

Piping plovers are a small white and tan shorebird species in great peril. The birds are listed as federally endangered. There are three populations: the Great Lakes, the Great Plains, and Atlantic. The Great Lakes sub-species was reduced to as few as 10 breeding pairs in 1990, but has since increased to about 70 breeding pairs in 2014. Most of these are found along Michigan shorelines. In 2014, only five pairs nested along Lake Superior in Wisconsin, none in the St. Louis River Estuary. The entire Lake Superior Basin supported 12 nesting pairs in 2014. By contrast, back in the early 20th century, the St. Louis River Estuary alone supported at least 12 breeding pairs. From 1957 through 1971, piping plovers nested on Barker’s Island, a barren island formed from dredged material. After that, there were only a few intermittent nests in the estuary. Barker’s Island was eventually developed in the 1980s. The last known nest in the estuary was in 1989 near the end on the inside of Wisconsin Point, at what is known as the Bird Sanctuary site. 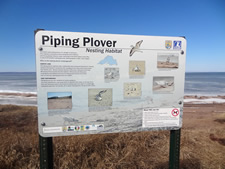 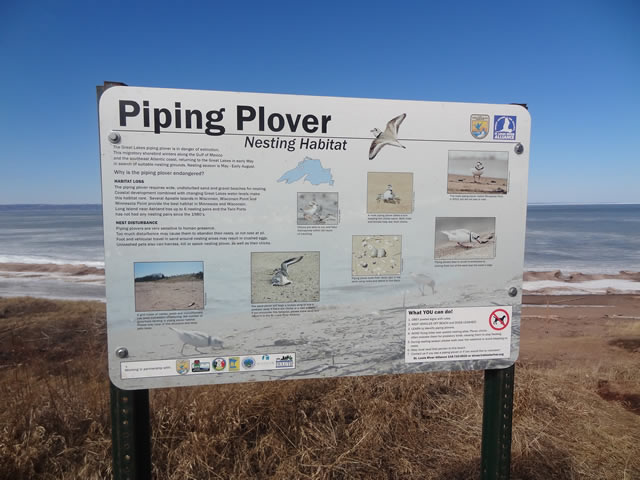 Piping plovers have specific habitat requirements for nesting: wide, barren beaches with trees a good distance away. Their nests are shallow, vulnerable scrapes in the sand lined with pebbles and driftwood. The wide beaches that plovers prefer happen to be the same areas where people like to spend summers in the sun. Development along coastlines over the past century, along with increased human use in the remaining habitats, has resulted in the endangered populations we see today.

Several factors contribute to the absence of nesting in the St. Louis River area today:

Wisconsin Point is listed as a critical habitat area for piping plovers by the U.S. Fish and Wildlife Service. The St. Louis River Alliance monitors beaches at both Wisconsin Point and Minnesota Point during the nesting season (from April 15 – June 30) and observes piping plovers each year. In 2014, a bird that fledged from Long Island near Bayfield, Wisconsin, was observed on Wisconsin Point.

The Bird Sanctuary is a small property owned by Wisconsin Department of Natural Resources near the end of Wisconsin Point on the bay side. This property was set aside in 1989 for piping plover. Through a partnership among the St. Louis River Alliance, U.S. Fish and Wildlife Service, and Wisconsin Department of Natural Resources, this property is monitored and managed for piping plover habitat. Annually, the site is prepared for the nesting season. The beach is re-sloped to provide a gentle incline to allow plovers water access along the beach, and vegetation and driftwood is removed. This site is closed to the public during nesting season.

In addition to the annual work at the Bird Sanctuary, the Wisconsin Department of Natural Resources, the U.S. Army Corps of Engineers, the U.S. Environmental Protection Agency, and many other local partners are evaluating the use of dredged materials to widen the beach and make the existing habitat at the Bird Sanctuary more appealing to nesting piping plovers. This is a priority action listed in the St. Louis River Area of Concern Remedial Action Plan. A feasibility study is complete and the design is scheduled for completion in 2018, with construction planned for 2019.

How You Can Help Bring Back Piping Plover

Story Maps combine interactive maps with text, images and other multimedia content to more effectively explore issues and patterns tied to specific locations. The following story maps facilitate a deeper understanding of the landscape of Wisconsin Point and efforts to restore its ecosystem.

A Photo Tour of Shafer Beach

This Story Map Tour features 28 photos from a walk along Shafer Beach at the base of Wisconsin Point in mid-September 2015. Shafer Beach is the site of restoration work to improve habitat conditions for Piping Plover in hope of attracting the migratory species.